Similarly to what has been reported some days ago in this thread (Wrong products sorting (Solved)), yesterday I noticed that the “System Settings Add-On Installer” Most-Download list was sorted strangely (Look-And-Feel themes section). As I’m speaking everything seems to be back to normal (as my product seems to be ranked in a fair position considering the number of downloads it receives: https://store.kde.org/p/1281836/).

Yesterday, when I was reporting the issue I wrote in the “Rating System” thread:

Actually, when I’m writing, the in-Desktop “Most Downloads” list for “Look-and-Feel themes” doesn’t even show my “Aritim-Dark LookAndFeel theme” (https://www.pling.com/p/1281836/ ) even if, since the first months it was out, it has been one of the most downloaded themes every day for the KDE section of the site.

Sadly I don’t remember if the “Most downloads” list was sorted “by newest” as it happened in a previous thread.
It seemed to be ok in principle, since themes like “Sweet KDE” and “Arc KDE” where placed in the first positions as usual. However, the problem was clear while scrolling the list: my theme, that should be placed near the aforementioned ones, was not even in the list, that was actually populated by themes that receives from 30 up to 70 downloads per day, usually.

This is not the first time that the Most Downloads sorting seems “random”: one could expect that, in general, all the themes should keep about the same positions day after day, of course by jumping 2-3 positions up or down depending on the today’s user preferences.
This never happens: sometimes I see my theme in the first position, the day after I’m 10th or even worse, this is not deterministic. Yesterday that was too much, since my theme magically disappeared.

This thread has not to be intended as a rant, I appreciate the fantastic work of the Opendesktop team as I repeated many times. I only want to acknowledge you that there are problems, probably server-side, that trigger itselves from day to day.

Maybe, also knowing the formula/algorithm behind that sorting could also help us find the cause of the problem (is it based on the “all time number of downloads” or is it a “download/day” ratio?

Yet another example: this morning I opened up the Add-On Installer and here’s what I found: 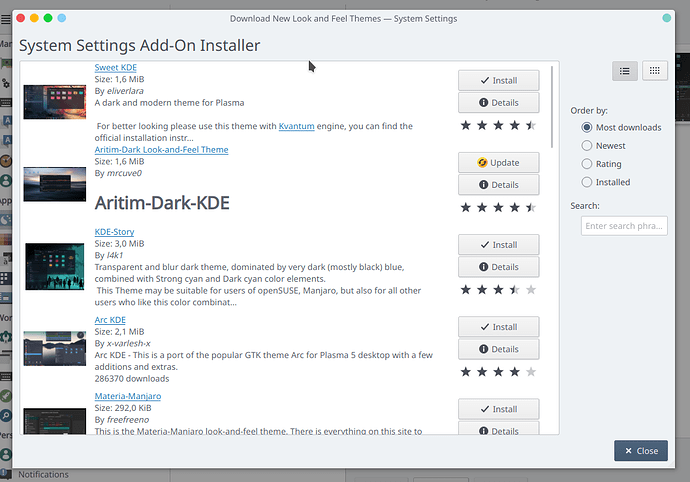 Here’s a quick comparison on the number of downloads:

(Again, I just picked up the first theme available with a evident low number of downloads than the others. I’m not accusing anyone, of course)

Now, what are the differences between the two themes?
The most evident one is the addition/upgrading date: KDE-Story was added the day before (and yet is quasi-on top of the chart?) while Arc-KDE has ben added the Jan 08 2017 and updated the Sep 25 2017.

So, assuming the addition/update date is the discriminant factor, why should it be? If there’s a “Newest” section, why adding this parameter also to the “most-download” sorting?

As you can see it’s easy to find anomalies in the product sorting, and that happens near everyday, hope you’ll take a look too.

That said, I take the opportunity to wish you all a nice weekend!

Can you do me a favour?

Go to download wallpapers and sort by Downloads and post a screenshot, I don’t have that plasma system settings to check. 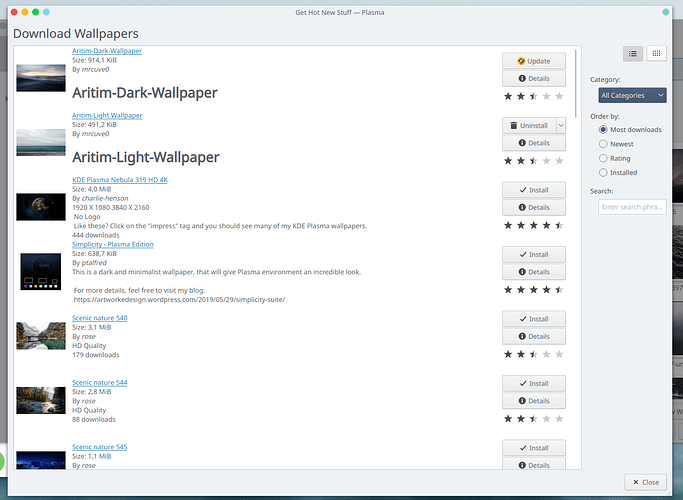 As you can see you are not in the “first impact” page. So I tried to scroll down and I can tell you that I found “Space Plasma” in the 31st position.

Then I tried to select the “Wallpapers KDE Plasma” and this is the screen I got: 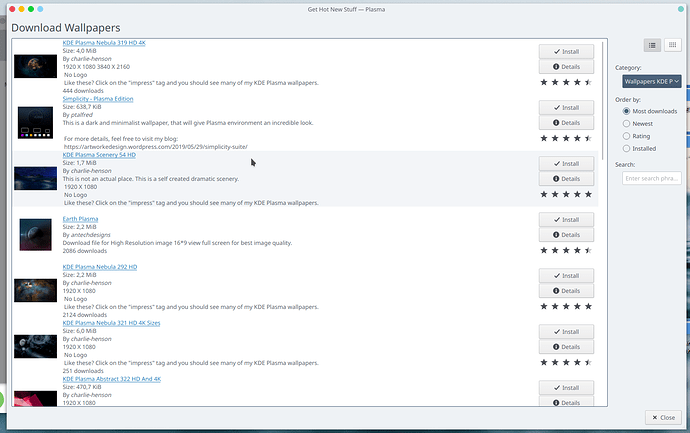 Your wallpapers are in the 13th position this time.

@mrcuve0
yep that’s what I thought, thanks for doing this and exposing whats going on here.

explains why our downloads have dramatically decreased!!

It’s been two weeks since I reported the problem and it’s still there!

Here’s what happens today, again for the Look and Feel section: 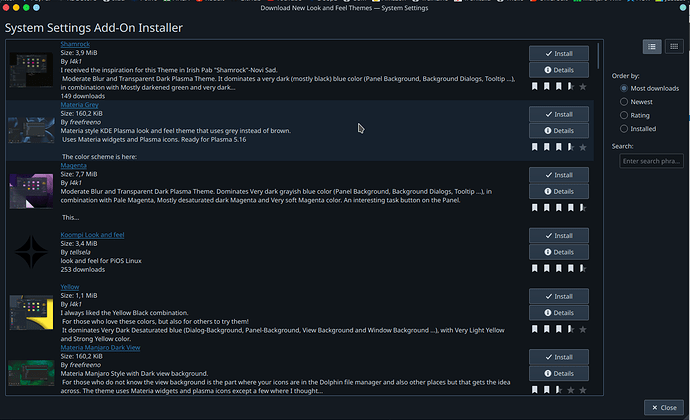 More surprisingly: the theme in 4th position has 253 downloads!
And then, once again, the “real” most downloaded themes (I’m thinking about Aritim-Dark, Sweet theme, Arc Dark and many, many others) are not even there!!

Dear @opendesktop, do you have a plan to solve this, or at least do you plan to adjust something?
Can we at least try to solve this together? Is there anything we can do?

EDIT: The “Most Download” section is sorted by “Newest”, this is what’s happening today: 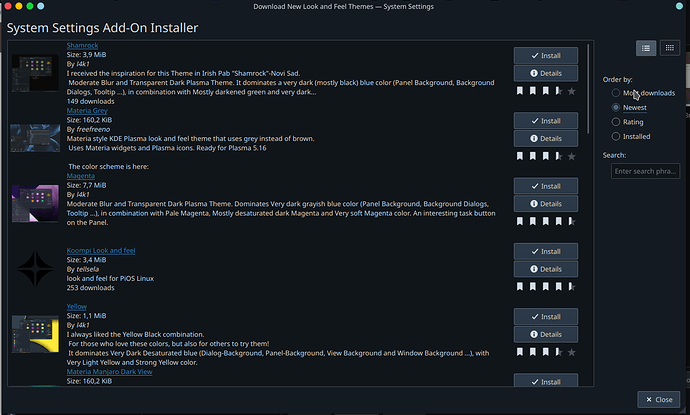 So I guess the previous thread has never been completely solved or a regression occurred recently.

The problem still persists: there’s an influx of products coming from the “newest” ranking directly into the “Most Downloaded” ranking, again. The behavior is unclear since there are actual themes with a “true” large number of downloads but other themes, here and there, are new and should be in a lower position according to math.

As I’m speaking a theme with 27 downloads, which has been added today for the first time, is in the 13th position!
Another one, with less than 1000 downloads is in 11th position
I’m sure there are more than just 2 themes (between the 11th and 13th position) with a download count between 1000 and 27.

Sadly no reply is coming from the @opendesktop team: I hope that they are working on it, but it is difficult to say, since so far no response has been received from them. I’d be glad to stop posting if only I received a response or even a “We are working on it” from their part. I think there’s a lack of communication on one of the most crucial and important aspects of the overall OpenDesktop experience.

This is harmful for everyone, from the average user who just download a theme by basing its decision on the number of downloads as an index of good quality, to the creator who is posting his/her work on the site and sees it’s product being crippled by a silly technical issue on a ranking system, and finally up to the admins and the site itself.

Finally, I hope I will raise some awareness in order to get other creators conscious of the problem, since the only ones that seems interested (by looking at the thread right now) are I and @antechdesigns.

Maybe it’s a problem on my side and this flawed ranking only affects me (I doubt, but still there it can be a chance), but it’s hard to tell if we are the only ones speaking on this thread and giving feedbacks to the team.

Have a nice day everyone.

Your not going to get any complaints from the people who are benefiting from this, this thing is a mess and wants changing back to what it was, like I keep saying ‘downloads don’t lie’

Thanks for reporting this and sorry for let you waiting so long. " look and feel " interface is independent on web interface. from my side I can not give you an exact answer yet . From how it behave you described, it is likely most downloads 24 hours. I already informed the person who responsible for it. i will inform you as long as i know more.

Thank you Maggie for your work, really.

So, now that you are saying that it can be intended as “most downloaded in the latest 24hours” it may explain why there are some “new themes” coming into this section.
This doesn’t explain however why sometimes some themes just disappear from the ranking or the ranking is completely copy-pasted from the “newest” one.
Finally, if that way of ranking is confirmed, I’d say the “Most Downloaded” label is a little bit misleading for the user (it may be better a “Most Downloaded latest 24h”) but that does not depend on the site, of course.

Still, take all the time you need to solve the problem. I know you have lots of stuff to do you guys and I’m glad we received a response from you.

Have a nice day everyone!