It can be for two reasons: 1) cheating and hacking, and 2) OpenDesktop developers’ failure in relation to JavaScript, which is less safe. OpenDesktop ignored my advice to get an ethical hacker and system analyst for finding out and removing the failures so the site would not be easily hacked and cheated.

Yep same, I will be focusing on my other projects from now on. Shame really.

This post has been here a few days now and not one reply from the admins so I doubt anythings going to change. Hackers & Cheats win again

It is honestly hard to reply to such accusations and assumption of bad faith.
If you truly think we do this as portrayed by you, maybe it’s the best you move on, instead of continuing with those constant downbringing remarks and such grieving heart.

Downoads are not the best way, as it becomes a self fullfilling prophecy, since you cant take a bad download back. The downloads are always visisble like on distrowatch at the side, and DEFAULT sorting in KDE with all negative side effects as well. There is no perfect rating system as any amazon or holiday site can tell you, nevertheless we listened probably more than any other site to improve on the feedback we get, though it takes time to do, and as fully opensource project we’re limited.

The Rating sort is only based on Ratings (as the name inplies), not Downloads. So was the previous Tab, just the Rating system was completely obscure. Make something transparent and open and people find flaws (which if true flaws is good and can be discussed and ideas to solve though of). Leave something obscure, people are fine as no one can think about it nor criticize. Best is then Google rankings and youtube suggestions by that logic

I think your missing my point, I am all for ratings, latest, downloads etc but its broken!!

Here is another example:

How is this number one by rating: 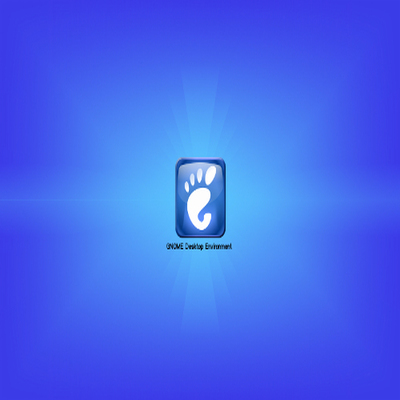 Here is something new for my friends here at GNOME-look in wide screen format.Enjoy and Peace

Just so you know I am not being biased

Number 3 has a better rating than 1 and 2 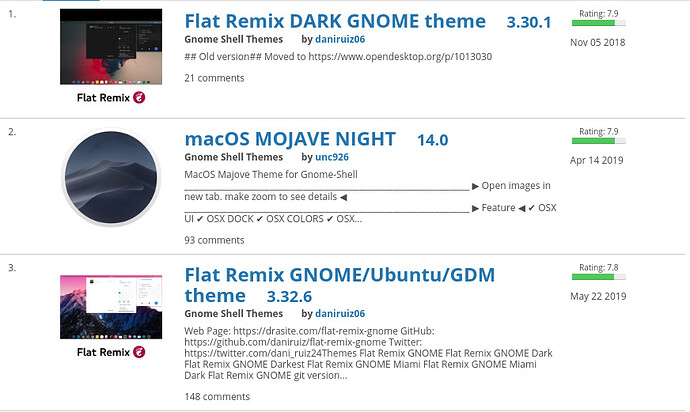 Now seriously, the new rating system is much better, the issues is with old projects with lots of 8 ratings it’s really difficult to get out of 7-8 rating.

No its not its broken, look at my last post.

You won’t until they fix it!!
Someone gave me a 10 rating on one of my products and it went up 0.1 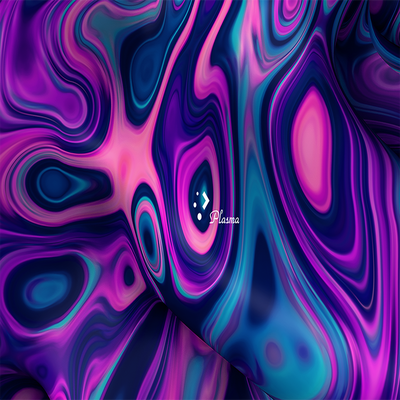 because it does not erase all the qualifications, maybe that would give us more opportunity to compete with the new projects, and maybe I’m not the best designer but I dedicate practically all my free time to that,

I’m adding myself to the list of complainers, like @daniruiz06 and @antechdesigns , sorry @opendesktop . I was waiting to see things solve themselves but I have now too many doubts and we think we need all some replies. Also, I don’t like complaining for the number of downloads/plings I’m getting since I think we are all very lucky to have this payout system (since it seems that voluntary donations are not a thing for the average Linux user in 2019, sadly).

The thing is that since some months (since February maybe?) the “Most Downloads” section in the “System Settings Add-On Installer” is completely bugged and messy (I would say “randomic” but I’m having doubts in this last days).

Actually, when I’m writing, the in-Desktop “Most Downloads” list for “Look-and-Feel themes” doesn’t even show my “Aritim-Dark LookAndFeel theme” (https://www.pling.com/p/1281836/) even if, since the first months it was out, it has been one of the most downloaded themes every day for the KDE section of the site.

According to the math behind the rating system, for that product it should be: 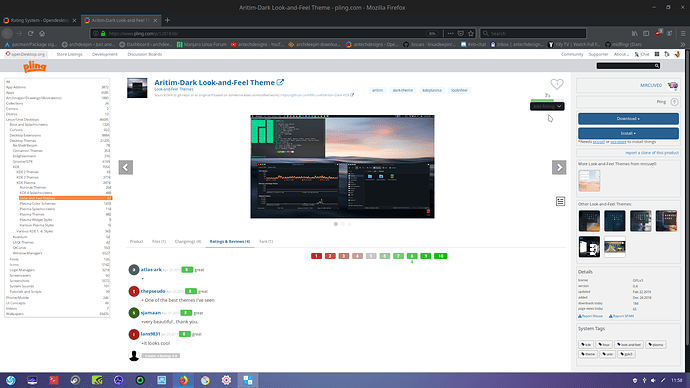 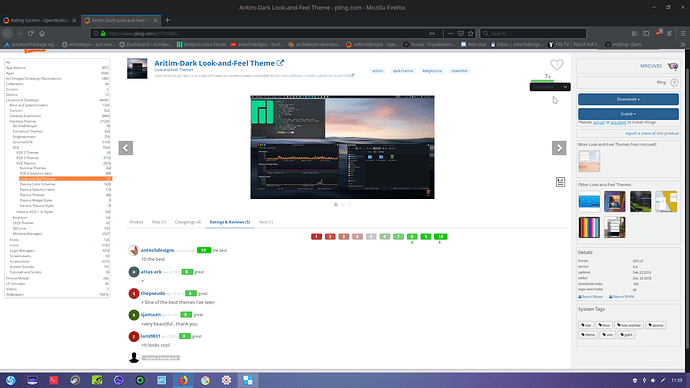 yet the product I posted above has got a rating of 8.0 with just 3x10 (when I posted it)

Its not complaining per say, these are just observations, some will choose to bury their head in the sand and say nothing. If you think somethings wrong, say something

Hi antech, thanks for the “test” ahahah.

It’s an arithmetic mean so it makes sense: you divide for the total number of votes obtained.

One could argue the introduction of the 2x5 initial votes that are initially applied to all of us is a bit misleading:
let’s for instance suppose I was having all 5 stars ratings (previously) that they got translated to “8”. An arithmetic mean where all the votes are “8” is exactly “8”, but this is no more true, of course, if you “stealthy” insert two votes that value “5” . I mean: in the comments section you cannot see these 2 votes rated at “5” so this probably misleads lots of people (me too actually, before this thread)

Of course it’s not a big issue, the computation is done correctly, at least in my case.

Finally, maybe I jumped on the wrong thread since you are all talking about ratings so maybe I should have started a new thread to keep things clean.
In my case, the issue is that I don’t know actually what’s the formula/algorithm used server-side to sort the products basing on the number of downloads.
I don’t know actually if it’s based on a “all time” downloads approach or on a “download/day” ratio. To me, since I have only the info that the products should be sorted by “most downloaded”, it’s seems really buggy these days. If someone knows something more please let me know.

Now, I re-checked to see if the issue continued to be there and my theme is back on the 7th position of the Most-Downloaded list, much more fair if you asked me. Again, today’s strange behavior is another symptom and indicates there’s an anomaly that triggers itself randomly on the server-side since it’s not the first time this happens.

Hoping opendesktop will help us to understand what’s happening.

EDIT: I was trying to see the difference between my products and the wallpapers with a “7.5” rating.
In their case they have a 10 votes rated @ 7.40

In my case, there are exactly 2 votes rated @ “5”, as you can clearly see from the screenshots: 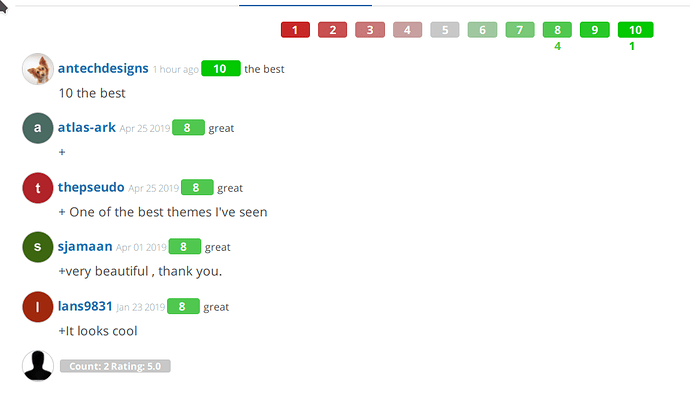 please open a new thread for the other issue.

Thank you maggiedong for your help, everything should be clear now. I’ll do as you suggested.

After another period of testing, we adjusted the base of the algorithm that calculates the Rating for each product. This is increasing the importance to have a larger quantity of votes compared to a few very high rated votes. We think this is more in line with what users suggested as feedback in the comments.

Great!!! When will this change start working?

Hi Dani.
I think the fixes already hit production. As far as I can see, they doubled the number of default “5”-valued votes.

Before the changes we all had 2 votes rated “5”. Now we should all have 4 votes rated “5”.
I don’t know if there are other fixes “under the hood”, these may be the most evident ones.