[BUG?] New rating received does not sum up with the overall rating

As stated in the title, a user added a positive rating to my theme (https://store.kde.org/p/1281836/) but the vote is not being added to the overall rating.

It actually seems like the vote was typed directly in the comment (since it has not a green background around it) instead of being assigned using the pop-up window, is this a bug? 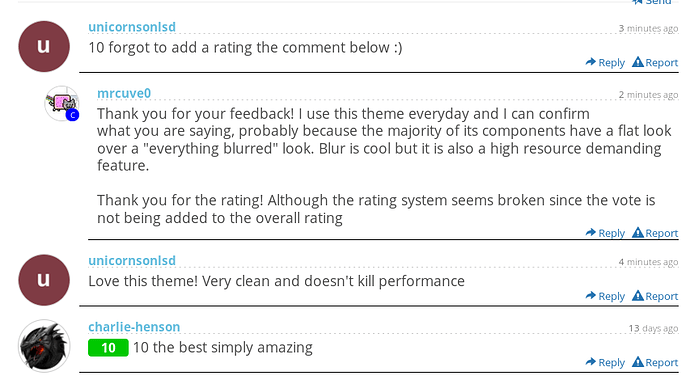 here’s the proof that the vote has not being summed up with all the others (the user does not appear in the list):

EDIT: Could this be an anti-spam protection? I thought this because it seems the user signed in to opendesktop just to give me this vote (that’s dedication! <3). In fact I helped him/her in a issue he/she opened this morning (https://github.com/Mrcuve0/Aritim-Dark-KDE/issues/6).
As you can see the nickname he/she used is the same, so there’s no reason the vote should be considered invalid.

Thank you for your time, wishing you all the best,

I think he just wrote it, I do not think he gave you a vote

You might respond to his message and clarify. He may come back at one point.

Thank you all, case solved.

So the only solution is to contact the user and ask if he/she can re-insert the rating? Is not possible for the mods to kindly change his/her comment to the real rating? That will be very kind, sincerely.
I’d prefer not to disturb again the user since he/she made an account just for that comment and didn’t make any access after that moment. I don’t want to seem too tedious and waste people time for such a thing (even if it’s still important to me).

The only reliable way to add a rating correctly would be to login and add it as the user.
Since we dont know the password though we cannot do that even if we wanted.

Got it, thank you for your reply!