Theme based on Mac OS 9 "Drawing Board"

I’ve looked for a theme based on (similar to or a lift from) the very old Mac OS 9 theme ‘Drawing Board’. 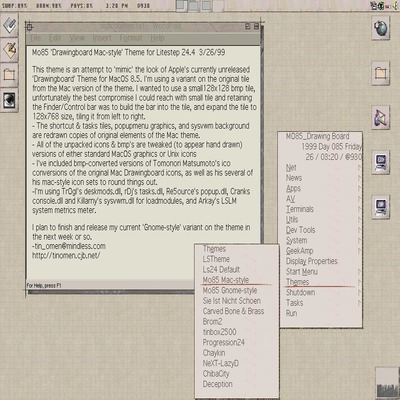 NOT A THEME! Only for inspiration! This is a theme for something. It was a theme fro MacOS from the beginning but was never released. I upload this to inspire someone who would like to make a...

This is the model image for the theme

If an artist wanted to make that I’d put a small sum toward the effort, and then use it forever.

Do you want the cartoonish look?
im very sad but i honestly fear thats impossible. (at least forgtk3).
Will draw you a png to show you how it could look if implemened on a modern system.

I could tell you a bit on how you can make your wish to come true like in the image i create later (for gtk2/3). But its so time intensive i won’ t be able to implement it.

Here a screenshot of something i will publish soon but its not that easy to code.
.

My guess how it could (possibly) look on xfce, mate. used painting tool sai and gimp to make this fake screenshot /design concept. 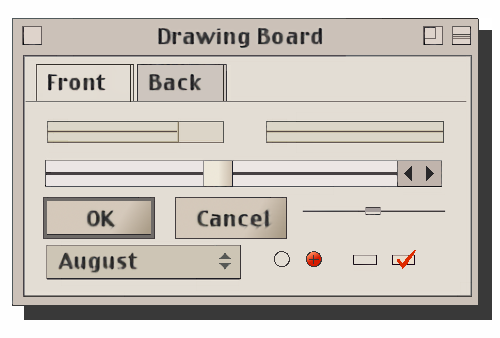 Here a png that you can implement it yourself if you want or ask someone to do it. 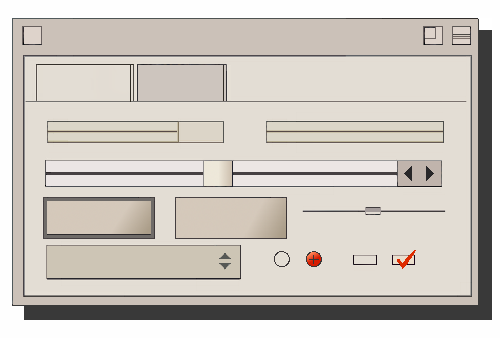 That is great you captured the font and colors, but yes I’m looking for something like the hand-drawn motif. What is the difference between OS9 themes and modern themes which makes this kind of design more difficult these days?

Mac os9 without hand drawn look , not impossible… The problem lies in the hand drawn look ,the gtk engine doesn`t give that flexibility stable.
Simply the fact that nearly all modern themes are based on gradients and not on images. They use text files and not images.

That was possible on ubuntu 14.04. Later i did skip using these things for the simple fact that it won’t render as crisp and sharp as the normal lines and break much more easily. The original theme name was oldwest.The Gtk Design did a very skilled theme creator that didn’t like modern gtk3. Then i named it brown old west and did port it to gtk3 with his permission out of interest. The design uses nearly the same techniques as your request.

On gtk3 i fear honestly thaf it would work stable and look good.
Tried now t o look if somethign has improved in gtk3 over my las test, not much.
The biggest problems do give the borders. And there you want a catoonyish look.
The screenshots shows adwaita with 1,2 small edits.

Maybe you cpuld as an kvantum theme creator of its possible for kde.
But there i do see only blurred bg or normal ones no crisp and shaop hand drawn variant.